Difference Between TCP/IP and OSI Model

TCP/IP and OSI are the two most widely use networking models for communication. There are some similarities and dissimilarities between them. One of the major difference is that OSI is a conceptual model which is not practically used for communication, whereas, TCP/IP is used for establishing a connection and communicating through the network. 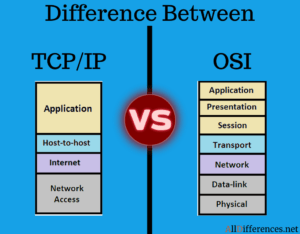 TCP (Transmission Control Protocol) /IP (Internet Protocol) was developed by the Department of Defense (DoD) project agency. Unlike OSI Model, it consists of four layers, with each having its protocols. Internet Protocols are the set of rules defined for communication over the network. TCP/IP is considered the standard protocol model for networking. TCP handles data transmission and IP handles addresses.
The TCP/IP suite is a set of protocols that includes TCP, UDP, ARP, DNS, HTTP, ICMP, etc. It is robust, flexible and mostly used for interconnecting computers over the internet.
The layers, TCP/IP, has are:

OSI (Open System Interconnect) model was introduced by ISO (International Standard Organization). It is not a protocol but a model that is base on the concept of layering. It has a vertical set of layers, each having different functions. It follows a bottom-up approach to transfer the data. It is robust and flexible, but not tangible.
The seven layers of the model are: